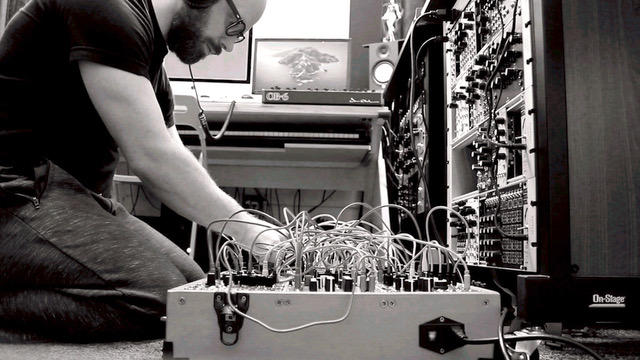 Below are my live electronic explorations during the week of October 26th, 2020

This live electronic Eurorack/modular synth jam was made using two channels of Instruo into an Optomix, and then double gating Optomix using 4 LFOs from two Maths modules. The result was complex rhythms and even some AM happening. Pressure CV to notes and drums provided by Basimilus Iteritas Alter. Lots of random provided by Frap Tools Sapèl and Make Noise Wogglebug.

Headphones recommended! This is a West Coast one oscillator modular synth euroack jam using ideas from Todd Barton. I’m using the Instruo CS-L with the wave folded output to an Optomix, the pulse width modulation output to a QPAS filter, with the stereo outputs being processed separately by Maths and Frap Tools Sapèl, and the Sine outputs to a Befaco A*B+C for AM modulation. CV from the Make Noise 0-ctrl is going mostly to the QPAS, with pressure CV going to the note sequence and the 1v/oct of the second oscillator section, which cancels out the AM. This was an absolute joy to make and there’s a lot of playing around with the stereo space, so I recommend headphones or good speakers.

This is my real homage to Todd Barton’s ideas about West Coast synthesis and using the minimum amount of devices to get the maximum effect. This Eurorack jam uses no sequencer and no assigned pitches. Tempo and randomness is controlled by the Frap Tools Sapèl, I’m using Make Noise Tempi as a clock divider for two different Maths modules. I’m using the wave folded output of the CS-L into an Optomix being controlled by one Maths that is also assigned to pitch CV (hence the bass drum sound). The pulse width modulation output is going to a Make Noise QPAS, which is being controlled by the other Maths assigned to Frequency and Resonance. Finally, the two sine waves are sent to a Befaco A*B+C to create amplitude modulation. Enjoy!

This jam was made using the burst envelope from an Intellijel Quadrax to “open a window” into the sequence that is running. Two outputs from the Instruo CS-L: one from Final and one from PWM. Both the wave folder and pulse width modulation are being modulated from Maths in Cycle mode to create a slow LFO. X-Pan is being modulated from channels 3 and 4 of the Quadrax in bipolar LFO mode. I recommend listening with headphones, as there’s a lot going on in the stereo field. The QPAS filter is being sequenced from 0-Ctrl, and I’m using a bandpass and a highpass output for the two channels. Finally, I’m using a sine wave output to a Befaco A*B+C to create some AM and to go to one wildcard input on the QPAS. Drums are from Noise Engineering Basimilus Iteritas Alter sequenced by Stillson Hammer. Enjoy!

In this live eurorack modular synth jam, I’m channeling my inner Steve Reich to create a minimalist piece. I tried to make the oscillators have an electronic gamelan type of tone by using an Optomix. The lower Instruo CS-L voice is using 16 steps, and the higher Serge NTO voice is using 15 steps. Both are going into filters (QPAS and Jove) with cutoff and resonance modulated by the Make Noise 0-ctrl. Ratcheting is coming from Echophon, and reverb is coming from Erbeverb. Master sequence is coming from a Stillson Hammer.